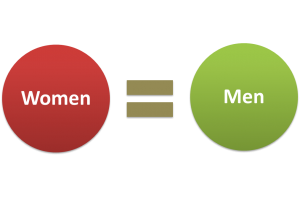 The month of March is considered to be “the” month for Women: International Women’s Day, African Women’s Day, Women’s History Month in the US and 2015 marks the 20th Anniversary of the Beijing Declaration and Platform for Action.

It is most certainly a month for reflection and awareness of the woman’s role in society, what is expected of them and outcomes that can be achieved with the active participation of women in all spheres of society.

The erroneous notion that women seek to be equal to men remains dominant in the gender dialogue. Indeed, women, by no means, seek to be equal to men but rather  aim to have equal opportunities in education, the right to vote, decision-making just to name a few. For centuries, women’s views have been shaped and influenced through a male lens during which time women remained passive partners while being denied equal rights, equal access to basic resources, education and more importantly, the right to be heard on critical global issues that adversely impacted their lives and those of their families.

The role of the woman has evolved and women continue to make significant inroads in all areas of endeavour despite the challenges that still exist in their quest for equal opportunities with their male counterparts. All persons, regardless of gender, race, ideology or religion reserve the right to develop their personal abilities and make choices without the limitations imposed by stereotypes. Gender equality does not mean that women and men have to be identical, but that they are treated equally and fairly.

Women do not seek to be equal to men, but to be recognized as human beings, reserving the right to be who they want to be while being able to exploit their full potential.