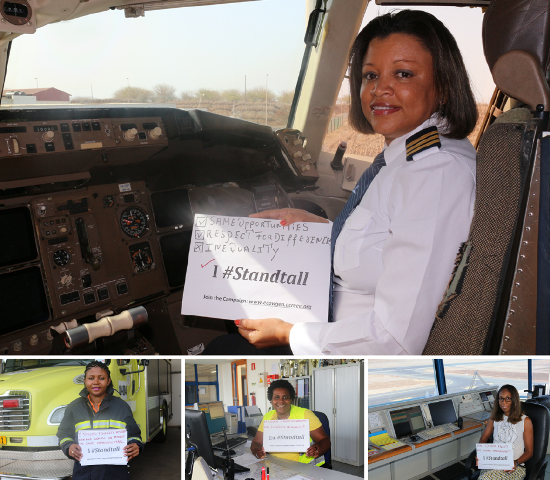 The labor market is increasingly becoming a heterogeneous environment, with women occupying positions that were hitherto filled by men and that women have made substantial progress in terms of equality in the work force.
Significant progress has been made in many fields but, much still needs to be achieved. Although many women have succeeded in breaking the barrier of prejudice and exercise professions considered to be typically male in nature, they still face many difficulties and this constant challenge seems to be the incentive that drives most women to prove that yes, they are able to exercise any occupation.

There are courageous professional women, who are part of the minority to occupy roles traditionally performed by men, despite still being the exception to the rule. Furthermore, they become examples so girls of all ages increasingly tread these paths and can also break gender barriers.
There is another point linked to the rise of women in professions that were predominantly male, which has to do with the status that they have achieved in the consumption chain. Women are taking more consumer decisions and there is a market logic in encouraging the hiring of women in business.

But where does this thing work “man” or “woman?” Boys and girls are educated in different ways and are oriented to approach certain fields differently, even though toys. Since childhood, attitudes, words, toys and advertising seems to play an important role in shaping children towards the identification and assimilation of gender roles in society. It is at this stage of a child’s development that an appropriation of gender roles are defined thus determining what is appropriate for boys and girls, and defining what they should like, behavioural codes, to name a few.
Another problem is the mirror image of society, when we see fewer women in engineering, construction or in aviation, for example, it tends to be perpetuated.

However, women are taking up traditionally male professions, but the opposite does not happen with the same intensity. Among the factors that could explain this fact is machismo, since many men are unwilling to take on roles in the workplace that are considered to be feminine thereby assigning a weaker stereotype to the man.
Northouse (2013) describes the maze of barriers, stereotypes, and prejudice as the Leadership Labyrinth. He further explains the Labyrinth as “the invisible barrier preventing women from ascending into elite leadership positions”. There is no doubt that women face gender-based stereotypes and prejudices, however as time goes on these barriers are falling. As women move into more male dominated roles, whether it be in business or other areas, the stereotypes, prejudice, and discrimination women currently face will diminish. Society’s perception of women will change and barriers will fall. Today’s young women now have role models to guide them where many of these successful women lacked in their youth.
In order to bridge the gap, we need to restrict stereotypes and labeling of jobs by gender. Women who are willing to break the barrier and enter a male-dominated industry are slowly decreasing the perception people have on the female gender.