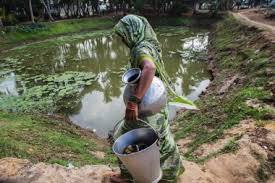 At the grassroots level, women should be at the forefront of climate change adaptation. This is because all of the impacts of Climate change such as droughts, heat waves, sea level rise, flooding, water scarcity, low crop yields and even health effects, have more devastating effects on women mainly because they interact with the environment a lot more than their male counterparts and often rely on the natural environment to sustain themselves due to the traditional gender roles they play as home makers and family carers.
In developing countries for instance, in most rural societies, women are responsible for fuel wood gathering for cooking, collection of water for domestic chores and are also responsible for farming activities, which means that the physical environment can be described as the mainstay of women’s welfare and livelihoods.
The mismatch in vulnerability between men and women in developing counties to climate risks is an internationally recognized phenomenon and calls for a gender approach to climate change adaptation that considers the diverse realities of those affected.
The United Nations Framework Convention on Climate Change-UNFCCC, defines adaptation as “adjustments in ecological, social, or economic systems in response to actual or expected climatic stimuli and their effects or impacts”. In simpler terms, adaptation means foreseeing the adverse effects of climate change and taking appropriate action to prevent or minimize these effects.
Apart from being the most vulnerable group, gender physiologists could argue that women have unique abilities; or strengths that are different from men that can enable them become resilient in the face of hardship brought about by climate change. The UN also asserts that women are expected to be particularly vulnerable to future changes in climate, but they also have particular knowledge and skills that could be leveraged for climate solutions. Already women have been proven to be agents of change in various works of life and whether at the grassroots level or national and regional levels, empowering them to make use of their intrinsic endowments within their communities and sphere of influence can significantly contribute to climate resilience.
Although gender factors come into play, putting women at the fore-front of climate change adaptation is not in any way to propagate the obvious, which is the need for mainstreaming gender and equality but on recognizing that women’s unique attributes can determine the nature of responses to changes in weather patterns, land and crop yields, water scarcity and also changes rainfall patterns etc.
Change management expert and blogger, Daryl Conner, explains that the capacity to adapt to change involves three types of energy which are the Mental , emotional and physical energy. Mental energy is to figure out what is happening and how to respond. Emotional energy is to deal with various feelings like loss, anxiety, threat, relief, joy, optimism, etc. and the third which is Physical energy, involves accommodating the bodily implications of stress, excitement, etc.
Even though pertaining to organizational change, Daryl Conner’s rationale on how people learn to adapt to change can be applied as an ideal framework for allowing women at the grassroots level to be at the forefront of climate change adaptation. Mental energy could imply stimulating the mind to deal with change through education. Emotional energy could mean addressing feelings relating to change through either support or encouragement and Physical energy could relate to empowerment and activities that have physical outcomes.
Educating Encouraging and Empowering Women are avenues to get women at the fore front of climate change adaptation. First, education is vital because women are often less formally educated. Secondly, encouragement is key, as women are sometimes discouraged and lack motivation, as traditional gender roles often limits and dissuades aspirations them to act outside their traditional roles. A good example of encouragement is bringing women together to participate in vulnerability assessments and disaster risks assessments in order for them to lend their voice and perspective on climate related risks and actions. And lastly, empowering women for climate change adaptation involves building the capacities of women and expanding their opportunities in terms of ease of access to finance to implement their chosen choices of response.
Focusing resources and attention on these three Es could increase the impact of women in building climate resilience societies and enable women to contribute to reducing climate vulnerabilities for themselves, their communities and globally.